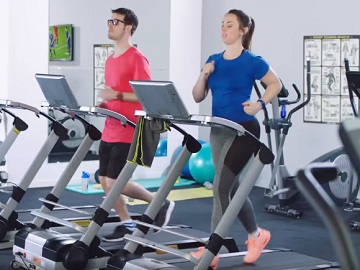 Aldi UK has released its Valentine’s Day advert, highlighting that “romance doesn’t have to pricey” and promoting its amazing deals on 30-day Aberdeen Angus Ribeye Steak and Organic Prosecco and roses.

The 30-second spot features a young man and a young woman running on a treadmill at the gym and the former telling her about his plans for this Valentine’s Day. He says he intends to cook her a delicious meal consisting of a 30-day aged Aberdeen Angus Ribeye Steak, Organic Prosecco and Melt in the Middle Belgian chocolate pudding, mentioning that it’s pricey, but she’s worth it. When the woman tells him he can get all that in Aldi, he stops running and falls down.

Aldi’s tagline, “Everyday Amazing”, is heard at the end of the spot, which also highlights the British supermarket chain’s status of partner of Team GB at the 2018 PyeongChang Winter Olympics.