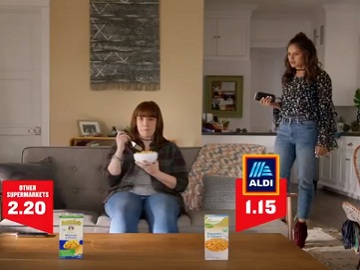 Aldi has just released a new commercial, highlighting that at Aldi you can find organic Mac & Cheese at a cheaper price with respect to “Other Supermarkets”.

The 30-second spot features a young girl eating a bowl of Mac & Cheese on the couch and saying she likes the organic Mac & Cheese from “Other Supermarkets” (priced at 2.20) and the organic Mac & Cheese from Aldi (priced at 1.15). “Is that my Mac & Cheese?” – her roommate asks her. This question leads to a series of other questions asked by each of them as reply to the question they’ve been asked and it turns out they’ve been using each other’s things, including a belt, a perfume, a bronzer, a choker, bangs from three years ago, and even a nose earring. Left speechless, the girl’s roommate, who’s wearing a “borrowed” nose earring, turns around and leaves.

The commercial ends with the voiceover saying the supermarket chain’s tagline, “You’ll like them both, but love our price”.

The ad also specifies that the prices shown are the national average of prices charged by Aldi for its exclusive brands and leading national competitors for the name brand product shown in areas where Aldi has stores during the period 12/02/17-12/08/17 and that prices at individual stores may vary.