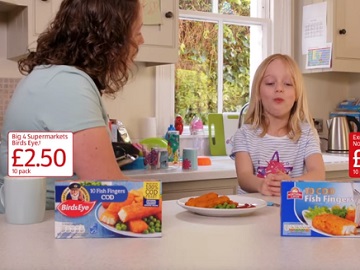 Aldi UK is supporting Deaf Awareness Week with the help of actress Maisie Sly and her mother. The two star in the latest advert for the British supermarket chain promoting the Aldi Brand Fish Fingers.

The 20-second spot features the profoundly deaf six-year-old from Swindon saying through sign language that she likes Birds Eye fish fingers, which at the big four supermarkets cost £2.50, and the Exclusive Aldi Brand Northern Catch Fish Fingers, which are priced at £1.39. In response, her mother asks her not to talk with her mouth full.

Maisie Sly is the star of the Oscar-winning short-film The Silent Child, in which she portrays Libby, a profoundly death four-year-old who lives a silent life until a social worker named Joanne (played by Rachel Shenton, who is also the film writer) teaches her how to communicate through sign language. Chosen ahead of 100 other children that were auditioned after a nationwide search, she made Rachel Shenton promise to give the acceptance speech at the awards ceremony in British Sign Language in case they won, which it happened. Shenton kept her promise with her hands shaking.

The Deaf Awareness Week is taking place, in the UK, from 14th to 20th May, with a series of events and activities aimed at raising awareness about deaf issues.

According to UK Council on Deafness, 1 in six people in the UK (around 10 million) are affected by hearing loss and 3.7 million are of working age. Adults and children who are deaf or hard of hearing face communication barriers that can lead to isolation, lack of confidence, depression and unemployment.