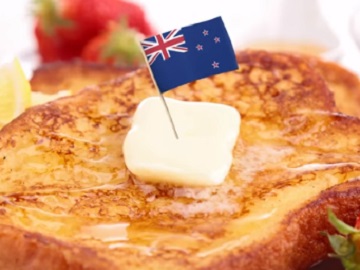 Air New Zealand is asking Kiwis to come up with a new name for French toast. The request is made in a new social media video released by the airline with the hashtag #MakeFrechToastToast, just ahead of the All Blacks game against France this weekend, highlighting that French toast should be called “toast”.

“Les Bleus have a nasty habit of trying to get in our heads. But we’ve long held our own against sneaky Frenchness like… French kiss – it’s called a pash, French Fries – yeah, nah, hot chips, French knickers – they’re undies, French doors – they’re well… just doors.” the voiceover says at the beginning of the spot, mentioning then “there’s one thing, found in every cafe, kitchen, and cookbook around New Zealand that’s lying in… French toast.”
“So Air New Zealand needs your help, it’s time to choose another name for it. Anything. As long as it’s not F**** Toast,” the voiceover adds, urging New Zealanders to tell what they think it should be called.