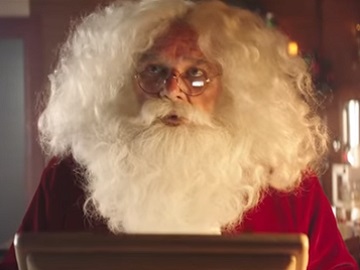 Air New Zealand has launched its Christmas ad, showing what happens when a Kiwi kid accidentally finds himself with one of Santa’s most confidential Christmas secrets.

The 3-minute film opens with a stressed-out Santa being approached by one of his elves and reminded there is one more thing to do on his to-do list, namely send “Naughty List” 2018 (aka the list of the kids who have been naughty) to elves. Instead of sending the email to elves@northpole.com, Santa sends it to Elvis Anderson, who it turns out is a boy living somewhere in New Zealand. When receiving the e-mail, the kid is in detention with some classmates, who are also on Santa’s Naugthy List. After taking a glance to the word written on the blackboard, Elvis comes up with the idea of organizing “the very first summit of all the naughty kids” and, for this purpose, asks help from Air New Zealand to bring peers from countries around the world to New Zealand for the event aimed at creating change.

Aware that they need to rebalance their karma, the kids start making all kinds of promises, such as reduce personal gaseous emissions by 27%, to eat more vegetables by 2019, a 30% reduction in hair pulling by 2020. Finally, New Zealand promises to do all their chores, spend less time on their phones and be nicer to Australia. As Elvis says that on behalf of Kiwi kids, he holds his fingers crossed behind his back. After this last promise from New Zealand, the balance measuring how naughty or nice they are goes to “Nice”, which makes all the kids celebrate their “victory”.

Later that day, Elvis is seen on a field, on his way back home, being asked by a friend if Santa will really know about what they did that day. “Of course,” he answers and then Santa’s voice is heard up in the sky, as he travels the world on his sleigh.

“Merry Christmas from the nicest place on earth” an onscreen line reads at the end of the film.