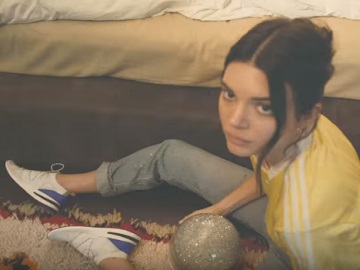 Kendall Jenner is presented, in the new adidas Originals ARKYN campaign, as “a shining example of an empowered female creator who cannot be boxed in”.

The model stars in a 15-second ad which describes her as “image maker,” “nomad,” “mediator,” and “muse,” while she’s playing with a glitter-filled globe, Shot by Renell Medrano in Jenner’s Soho apartment, the video also showcases the sneaker, which is designed with a sock-like constriction, has a technical mesh upper, decorated with the brand’s classic Three Stripe detailing, a mesh tongue, a neoprene heel and a minimalist lacing system.

First teased in the NAKED x adidas Consortium collaboration in August 2017, adidas Originals’ brand new sneaker, described as a “new, technical silhouette, rooted in adidas’ iconic vintage style, that looks both to yesterday and tomorrow,” will be released in April.

The campaign also stars Ana Kras, Marisa Competello, Florencia Galarza, and Syv De Blare, who have been captured, just like Jenner, in their real living and working spaces.

Kendall Jenner became a brand ambassador for Adidas in May 2017. Earlier this year, she modeled the debut collection of 23-year-old Amsterdam Fashion Institute student Danielle Cathari for Adidas Originals at New York Fashion Week, together with Hailey Baldwin.