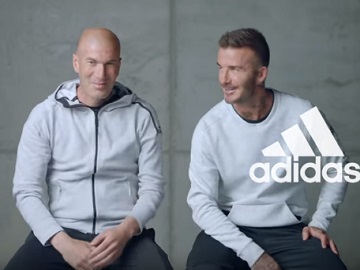 adidas Football has brought together David Beckham and Zinedine Zidane to co-star in a commercial for the return of the brand’s Predator Accelerator boot.

The two football legends sit close to each other and list alternatively the things they like about each other, but without looking at each other. They mention “the talent”, “the precision”, “love of the game”, “the courage”, “the energy”, “the touch”, “the work rate”, “the creativity”, “the class”, as well as tangible things, like “the suit” and “the hair” and the World Cup medal.

The spot, titled “Create Respect,” ends with the onscreen line “Here to create”.

Re-released in both trainer and cleat form, the Predator Accelerator comes in an “Electricity” colorway, with a bright yellow upper and black three-stripes while the signature fold-over tongue comes in red. Similar to the first release, the shoe will drop in a limited-edition number, with only 1999 pairs made available. Both pairs are set to release on July 5th on the brand’s website, with the trainer retailing for $250 and the cleat arriving at $350.
Originally released in 1999 with only 999 boots available, this boot became one adidas’ most iconic silhouettes, worn by David Beckham and Zinedine Zidane amongst others.