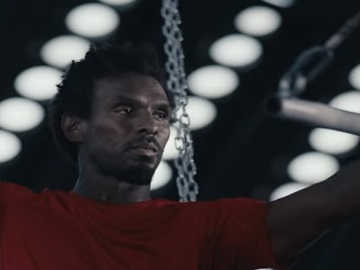 888casino marks the launch of its new gaming platform, which offers hundreds of new games and a faster, more reliable experience to players, with a new ad campaign, from creative agency Recipe, titled “Suspense – New Heights”.

One of the spots, dedicated to the roulette, takes place inside the game and features three trapeze artists dressed all in Roulette colours of white, red and black, with the black and red trapeze artistes trying to grab the “white ball” artiste. The opera music serving as the soundtrack is the aria Largo al factotum from The Barber of Seville by Gioachino Rossini. The ad ends with the voiceover saying “Suspense in every moment. The new 888casino – Taking it to new heights”.

Another spot, dedicated to the slot games and dubbed “Tightrope,” features a tightrope artiste carefully walking a rope and leaping forward for the final golden bell icon while around her various slot machine icons are floating into the air.

Founded in 1997 by brothers Aaron and Avi Shaked along with partners Ron and Shay Ben-Yitzhaq, 888casino (formerly Casino-on-Net) became, in 2013, the first exclusively online casino to be licensed in the United States. From 2013 to 2015, it receives several awards, such as Best Casino Operator, Digital Operator of the Year and Operator of the Year.