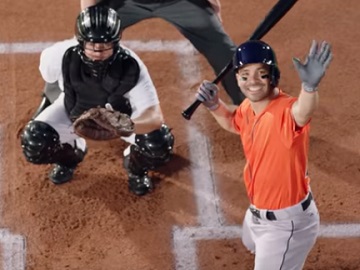 5-hour Energy invites people, in its latest commercial, to enter the 5-hour ENERGY sweepstakes for the chance to win a trip to the 2018 MLB All-Star Game.

“5-hour ENERGY can get you back to 100%. It can even get you to the 2018 MLB All-Star Game,” the voiceover says on the 30-second spot, which features a young man buying several 5-hour ENERGY shots and having, in his shopping bag, a glimpse into a baseball game, where the Houston Astros second baseman José Altuve stops what he’s doing to greet the customer. The ad also informs about the steps to be followed to enter the sweepstakes, namely buy any flavor 5-hour ENERGY shot, including Extra Strength Cherry flavored 5-hour ENERGY shot, snap a picture of the receipt, text 5HEWIN to 811-811, and then upload the photo using the link provided. “Your trip to the All-Star Game could be in the back,” the voiceover adds at the end of the spot, which also celebrates the brand’s status of Official Partner of the 2018 MLB All-Star Game.

This is the second year of the company’s deal with Major League Baseball. In 2017, José Altuve, World Series Champion, American League MVP and brand ambassador for the brand, filmed a commercial for the Energy Upgrade on the campus of Rice University in Houston, TX, where he mastered every position in baseball, mingled with fans for an autograph session and even turned into a hot dog vendor, seeing that the folks in the stands looked hungry.

The 5-hour ENERGY contains, according to the brand, “zero sugar, four calories and about as much caffeine as a cup of the leading premium coffee”. It is also available in a Decaf version (citrus flavor). The winner of the sweepstakes prize will receive a trip for two to the T-Mobile Home Run Derby and MLB All-Star Game presented by Mastercard.