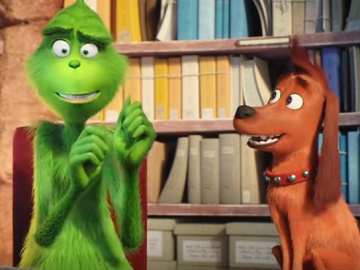 23andMe invites people to give the gift of a DNA kit in its latest ad, which is also an invitation for viewers to discover The Grinch’s DNA story and see The Grinch in theaters.

The 30-second spot features The Grinch eager to see “what all this DNA kit fuss is about,” admitting he’s “a little curious”. He then reads some of the results, such as “Genetically likely to move more than average during sleep,” “loving salty snacks,” which are all true, as The Grinch himself said. “This was great, maybe I do like getting gifts,” he also says, to his surprise, revealing that he can’t believe he just said that.

“This holiday season, give the gift of a DNA kit from 23andme.com,” the voiceover says at the end of the commercial, urging then viewers to see The Grinch only in theaters.

This is not the only company promoting the new animated comedy Christmas film based on the 1957 Dr. Seuss book “How the Grinch Stole Christmas!”. Earlier this year, IHOP celebrated The Grinch movie with a new Grinch-inspired menu, which includes all-new Grinch green pancakes with cream cheese icing and a new mint hot chocolate with green whipped topping.

The Grinch, also known as Dr. Seuss’ The Grinch, was directed by Yarrow Cheney and Scott Mosier and features the voices of Benedict Cumberbatch, Rashida Jones, Kenan Thompson, Cameron Seely and Angela Lansbury. According to the official synopsis, The Grinch hatches a scheme with his trusted canine Max to ruin Christmas when the residents of Whoville plan to make their annual holiday three times bigger that year. Meanwhile, Cindy Lou Who plans to seek out Santa Claus to thank him for helping her widowed mother every Christmas, but little does she know she is trying to blow the Grinch’s cover.