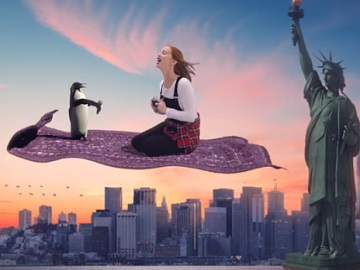 Yahoo presents “Out Of Office Heroes” in a new ad campaign launched aiming to show Internet celebrities who use Yahoo Mail to keep their life organized and balanced.

The two spots released so far feature Kalani, aka KalaniBallFree, an entertainer who does bascketball tricks, and Jackie Oshry, aka JackieOProblems, a Colgate alumnus who runs a successful Instagram account called “JackieOProblems”. The latter is seen, in a 15-second spot dubbed “JackieOProblems is #SoOutOfOffice with Yahoo Mail”, in the company of a penguin on a flying carpet, visiting several cities and taking photos of landmarks like the Statue of Liberty and the Eiffel Tour. “I’m so out of office right now.” – she says after swallowing a whole fish thrown at her by her little friend.

Ohsry is also media strategist at AOL, a global digital media and technology company, brand marketed by Oath, a subsidiary of Verizon Communications.