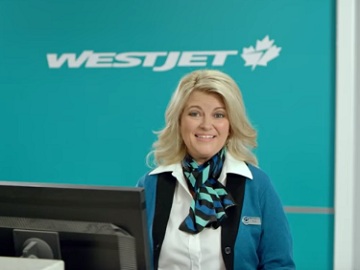 In the spot promoting the Simplicity Service, a man wearing a suit (a businessman apparently), upset that he missed his flight because of a meeting, talks to himself in the departure terminal of an airport, saying what he would do if he owned an airline. “If I owned an airline, I’d let you get on a later flight if your meeting ran late. No charge! I’d call it Simply, or Simplest.. flying alternate. It’ll be an acronym”.

At this point, a WestJet employee explains that the man’s idea with no fee for same-day flights is, in fact, a reality: “Simplicity! On Simplicity routes we have no charge flight changes.” – says the lady.

The spot promoting the Premium Economy features the same man in a waiting room, sharing his ideas with a woman looking at her tablet, who doesn’t look interested in making conversation. “If I owned an airline, in Premium Economy, you’d get room to stretch your legs without stretching your budget. Bingo!”.

The same employee informs viewers that, actually, with WestJet Plus, they get “more for less”.

All the spots ends with the tagline “Just another way we do business differently”.