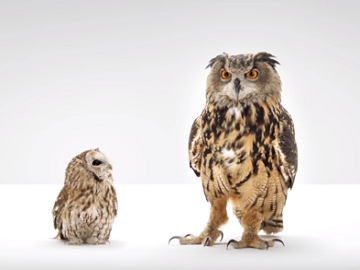 Western Governors University has released a new ad to highlight that WGU is online, nonprofit and surprisingly
affordable.

The 30-second spot, titled “Wisdom”, features two owls, a big one and a smaller one.

“As the official spokesowl for WGU, I use my gift of wisdom to enlighten people.” – says the big one.
“You’re very wise.” – says the small one looking to her fellow.
“Yes, but it’s the graduates of WGU who are truly the wise ones. They chose a university that’s honored for excellence and earned a degree that’s respected by employers.” – adds the spokesowl, which makes the other one say that’s “Impressive”.
“But can they do this?” – asks the small owl, rotating her head 360 degrees.
Not impressed at all, the spokesowl says that “no employer wants that”.

The spot ends with the voiceover saying “online, nonprofit and surprisingly affordable – WGU – it’s a new kind of you”.

Previous: The Beard Club Man on the Beach Commercial: Grand Realization
Next: Progressive Insurance The Climb Commercial: The Box