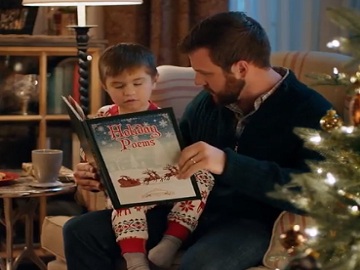 WeatherTech has launched a hilarious Christmas ad, inviting viewers to “Get him everything on his wishlist this year at WeatherTech”.

The 30-second spot, titled “Dad’s Holiday Poem”, features a dad holding his little son in his lap and reading to him a Christmas poem. “It was a beautiful holiday night. The snow was in the air.” – the man reads. In the meantime, his wife brings him a cup of tee and some chocolate chips cookies. Watching her go, he continues the poem totally differently, looking at a WeatherTech catalog placed in the Christmas Poems book”. And a set of WeatherTech FloorLiners placed under the tree with care. A new bump step to protect daddy’s nice SUV, and seat protectors, all just for you, Stevie, and cargo liner Lassie’s measure to fit just perfectly.” – the man “reads”, making sure that he’s heard by his wife. The latter is then seen asking him “And what story is that?”. Her husband answers that it’s the WeatherTech poem, their favorite.

The commercial ends with the voiceover urging viewers to order the perfect holiday gift today at WeatherTech.com and wishing them Happy Holidays from WeatherTech.