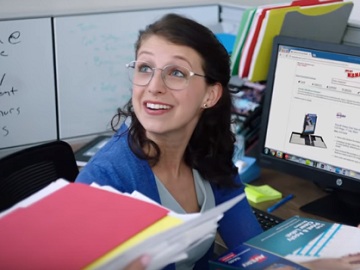 W.B. Mason highlights, in one of its latest ads, that it delivers the best products, like Avery binders and dividers, the same day.

The 30-second spot, titled “Literally”, part of the brand’s new film series called “Office Adventures with Millenials”, features a lawyer asking her assistant, Mandy, to organize a bunch of papers for her trial, set for the next day. “Done!” – says the young employee, explaining that she ordered Avery binders and dividers from W.B. Mason and that “they literally deliver like the same day”. “You mean figuratively same day” – says her boss, without believing that the dealer actually delivers the same day. “No, literally” – answers her assistant. “Figuratively” – says her boss.

The assistant doesn’t give up and says, once again, “Literally, the same day”, adding, immediately, so that her boss wouldn’t have the time to say another word, that “W.B. Mason has been delivering the best products, like Avery binders and dividers, the same day for literally 20 years”.

At this point, a W.B. Mason delivery guy shows up, handing over a package. “Hey, you can literally promote me now!” – the assistant tells her boss, who replies that she’ll “figuratively think about it”.
“Who but W.B. Mason? Fast and convenient.” – says the voiceover at the end of the spot.