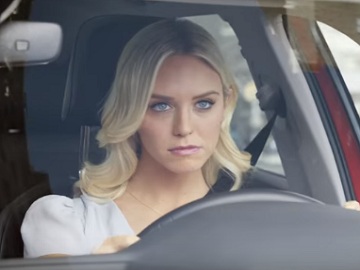 Volkswagen has launched a new commercial to showcase the 2018 Tiguan, which is introduced as “the new king of the concrete jungle”.

The spot, set in New York City, features an inflatable gorilla looking like the legendary King Kong that escapes from a car dealership after seeing the all-new Tiguan. The SUV, driven by a young blonde woman (Paige Mobley), is followed by the balloon, that floats above the city streets and climbs the Empire State Building to look at it.

The song used in the ad is “Livin’ Thing” by Electric Light Orchestra.

Paige Mobley (22), the daughter of celebrity and commercial photographer Paul Mobley, rose to fame as a finalist on the revamped America’s Next Top Model on VH1. She starred as a model in the film Transformers: Age of Extinction, and also had minor roles in the TV series’ Gossip Girl and Zip. As for current projects, she appears as Olivia in the TV mini series Socially Awkward.