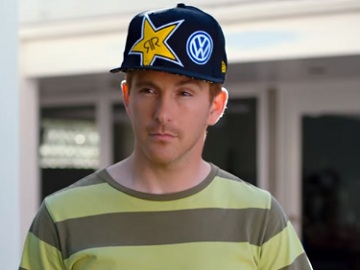 Foust acts like Tom Sawyer and manages to make Speed mow for him in the 50-second spot, titled “Speed Test”. The pro racing driver is shown taking a lawnmower from the trunk of his Volkswagen and starting to mow, until his mate shows up and he has an idea: lie to him that the lawnmower is his “secret training tool”, justifying, when Speed laughs at him, that “it tests strength, endurance and, of course, speed”. He also says that he can mow the respective lawn in five minutes, “not a second more”, which his mate doesn’t believe. “Ya, right!”, answers Speed, who is then told “I could do it faster than you”. This is enough for him to take on the challenge and prove that he can do it even faster.

What happens? Speed is slogging to mow the lawn and Foust is treating himself with a cocktail for his amazing idea. “Maybe you are faster than me!” – he says before having a mouthful of the respective beverage.

The spot ends with the Andretti Rallycross logo and with the hashtag #VARX Supercars.