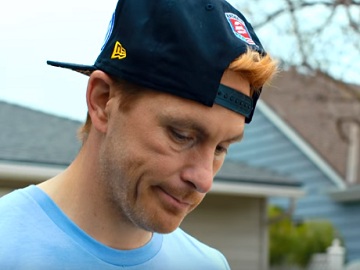 Volkswagen has released a new commercial, inviting you to see what happens when Scott Speed’s dreams mimic reality.

The 30-second spot features the back-to-back series champion holding a hose in his hand, waiting for the water to come out and fill a bucket, so that he could wash the No. 41 Oberto Circle K Beetle GRC behind him. In the meantime, he dreams of winning the 2017 Red Bull Global Rallycross championship and celebrating, on the podium, with a bottle of champagne that fizzes. Imagining that, he sprays his partner Tanner Foust, who shows up without being seen and says that he celebrates this way “every time he wins”.

The championship-winning drivers returned for their fourth season with the Volkswagen Andretti Rallycross team, hoping to achieve also this year similar levels of success to their 2016 campaign. While Speed will be driving the red, white, and green No. 41 Oberto Circle K Beetle GRC for the majority of the season, Foust will get at the steering wheel of a newlook No. 34 Rockstar Energy Drink Beetle GRC.