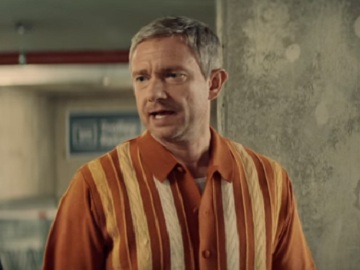 After returning from the overseas wedding, Martin Freeman is back in Vodafone UK’s new ad campaign as Mr. Interruption, in a new spot aiming to demonstrate that their network really can save the day in an action-packed situation.

The 60-second spot, done by Ogilvy & Mather UK agency and aiming to promote the brand’s “outstanding indoor coverage”, is entitled “The Chase” and features a black car chased by the police entering an underground parking lot, where Freeman’s character is packing his groceries in the trunk, eager to keep the prawns he bought fresh.

When the car, with a suspect gang onboard, stops near Freeman, one of the guys asks him to keep packing and,
learning that he had just finished, asks him to unpack. The woman witnessing the situation tells him, in a discreet voice, she’ll call the police, but he believes she won’t get reception where they are.

Luckily, she’s on Vodafone, and she has four bars, which enables her to call the cops and save the day.

The advert ends with the two being surrounded by police officers, who arrested the two criminals on the run, and with the voiceover saying “Outstanding indoor coverage on our most reliable network”. Unfortunately for Freeman, his prawns didn’t survive the heat.