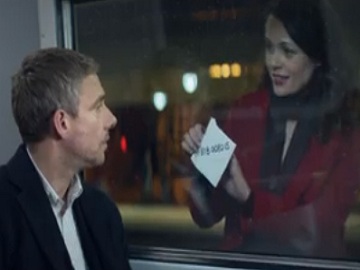 The first spot, “Love on the Platform”, sees Martin waiting for his train at the platform, on a wintry evening, and noticing that the beautiful young lady sitting next to him on the bench is watching “It’s a Wonderful Life” on her smartphone. He begins to say something about how expensive this is, but she tells him she’s using her Vodafone Video pass to stream the film. After getting on the train, the actor regrets he hasn’t asked her on a date, but, luckily, he has the chance to do that later on as she shows up by the window and gives him her number (with the excuse to let him know how the film ends).

The second spot, promoting PAYG 1, a new approach to Pay as you go, giving customers unlimited calls, texts and 500 MB of data without spending more than £1 a day, sees Martin in his room, trying to make “The First Call”. Standing in front of the mirror with the phone in his hands, he prepares to get in touch with the mysterious woman by practicing various lines. “Hey, it’s me. The ‘Give you the moon’ guy.”, “Hey, I was next to you on the bench?”, “I was the guy creeping up on you… not creeping.”, “Hi, it’s the man who was looking over your shoulder at the station.” – are just some of the introductory lines he’s coming up before actually calling her.

Vodafone’s 2017 Christmas integrated campaign, including other spots revealing how the festive love story between the two unfolds, launched on November 1 on Channel 4 during Grand Designs, and will also feature across digital and social platforms.