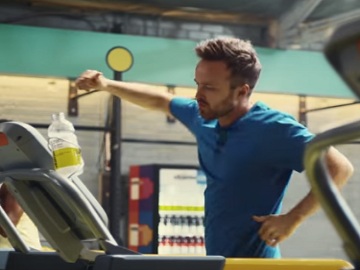 Aaron Paul stars in vitaminwater’s new ad campaign, urging viewers to consumers to grab a bottle of their favorite flavor and “Drink Outside the Lines” this summer.

The Breaking Bad star is featured in a commercial created in collaboration with Ogilvy, at the gym, running on a treadmill alongside other persons. After taking a sip of vitaminwater zero, he decides to change the way he does his workout and, ignoring what others might think of him, starts showing off his dance moves on the treadmill, entertaining not only himself, but also those around him, who soon follow his lead and start dancing, as well.

The song playing in the background is “Feel It Still” by Portugal. The Man, an American rock band, from their latest album, “Woodstock”, released earlier this year.

The voiceover describes vitaminwater zero, at the end of the spot, as a “refreshing combination of vitamins and electrolytes” and says the brand’s tagline, “Drink outside the line”.

The campaign will roll out this summer on TV, digital and social platforms, in movie theaters across the country, and also at in-store points of sale and at various events and through partnerships.