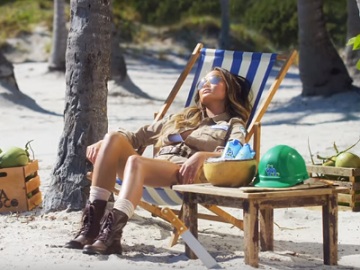 Chrissy Teigen is the new Vita Coco Plant Manager, keeping track of her employees, in a new commercial released
by the global brand.

The 31-year-old model and TV personality, starring in a campaign aiming to highlight that Vita Coconut’s coconut
water is water from a coconut, is shown on a white-sand beach at Key Biscayne, Florida, lounging in the sun, on a chaise long, with her sunglasses on, beneath a coconut tree. The unbuttoned brown custodial uniform she’s wearing
gives viewers a peek at her white bikini top.

“The first rule of being a plant manager is to always keep track of your employees, micromanage them, make sure they’re producing” – explains the voiceover, while she’s still chilling in the sun. When one of the coconuts falls from the tree, she pats the trunk and praises it as “employee of the month” and then, to refresh herself has a mouthful of Vita Coco coconut water.

“It might feel overbearing, but you really souldn’t leave their side” – adds the voiceover, making Chrissy answer,
referring to the tree near her, that “he’s just an intern” and urging the voiceover and viewers to “get it together”.

The spot ends with the brand’s tagline, “Hydration Comes Naturally”.

This is not the first drink Chrissy Teigen endorses. She also stars in a campaign for Smirnoff, stating that she drinks the brand’s vodka because it’s “great tasting”, “without any of the nonsense”.