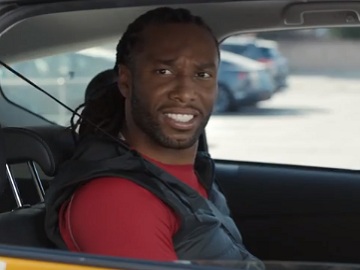 Larry Fitzgerald stars in a new Visa ad campaign, promoting the contactless Visa card, which enables users to pay quickly with just a tap wherever they see the Contactless Symbol.

The campaign includes several 15-second spots in which the Arizona Cardinals’ wide receiver is seen by fans at halftime in places where no one would expect to see him, such as a bakery (where he buys a mid-game snack), a grocery store (where be buys a bunch of flowers), a drug store, and more.

In one of the ads, Fitzgerald is spotted by a little girl and her dad in a taxi parked in front of a market. Surprised to see him there, she asks him if he doesn’t have a game soon. The football player confirms he has indeed a game, but mentions he has time for errands because now he can pays so quickly with a tap with his Visa card.
“Oh, that’s fast!” – the girl’s father exclaims seeing how fast the NFL star had paid for his ride. “Yeah, that’s how fast my heart will break if you miss this game.” – the girl adds in a very serious voice.

The commercial ends with the voiceover saying the tagline “You have places to be. We help get you there faster.”