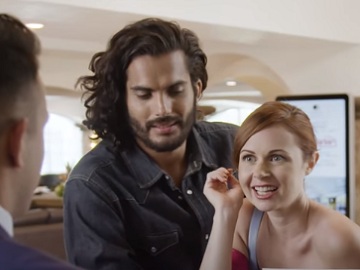 Virgin Holidays shows us, in a short video, what it would be like if we treated straight couples like we treat gay couples on holiday.

The company states that, according to a new research, only one in twenty LGBT+ people feels comfortable showing affection on holiday, and that it believes this needs to change “so that everyone can take on the world”. The film features various reactions and comments made by people around a straight couple on holiday. Thus, a guy at the pool tells them to get a room when he sees the two putting on sunscreen on one another, a bellhop is asking them what brings them into town and learning they’re on their honeymoon, cannot help but show his surprise by laughing out loud. “There must be a mistake. They have you in a room with one bed.” – the receptionist tells them, adding “That would be weird.” In the elevator, a lesbian couple wearing bathrobes approaches them by saying “You must be the fun, straight couple at the resort. We’ve heard so much about you.” The next day, at the pool, an older man asks them if they are together and, after receiving a confirmation, adds he got “great straight-dar”. “But don’t worry about it because I think it is super cool.” – he adds, starting to talk about his straight friend.

This doesn’t end here, though. The straight couple soon find themselves in awkward and even indelicate situations, as they are asked to pay the full price for renting bikes instead the special price paid by couples (because they are not “a real couple”), a lady who takes a picture of them says their kiss is “gross”, another couple cannot believe they are seeing a straight couple at the resort (“They’ll let anybody stay here, won’t they?), and a waiter asks them to not kiss each other in the restaurant.

Virgin Holidays invites you to share the video if you think everyone should feel good on holiday.