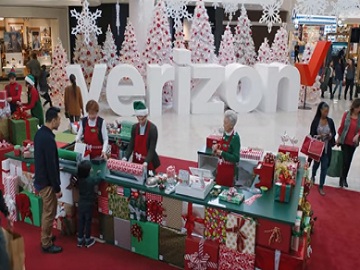 Thomas Middleditch returns to the small screen in a new Verizon commercial to promote a deal on Google Pixel 2, that gives the chance to customers to get $300 off when buying any Google Pixel 2, with no trade-in required.

The Canadian actor, known for playing Richard Hendricks in the HBO series Silicon Valley, is seen working at a gift
wrapping booth in a mall and telling a little boy that “it doesn’t matter how you wrap it, it’s what’s inside that counts.” When the kid reveals it’s a phone for his mom, Middleditch answers that his gift is already wrapped in Verizon.

The 15-second spot ends with the voiceover urging viewers to give the gift of any Google Pixel 2 and get $300 off.

Middleditch became a Verizon spokesman earlier this year and has appeared in several other commercials for the
telecommunications company. In one of them, promoting Google Pixel 2, he says about Google and Verizon’s partnership to present the Pixel 2 as a match made in the tech heaven.