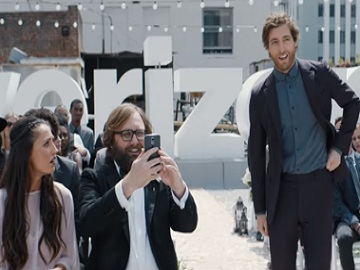 Thomas Middleditch stars in a new commercial for Verizon, promoting the company’s Unlimited Data Plans and the 4G LTE coverage, described as “the largest, most reliable in America”.

The 30-second spot, titled “Live Wedding”, features the Silicon Valley actor showing up at a rooftop wedding ceremony the moment the officiant asks if there is anyone wishing that the couple should not marry. Middleditch, who is the Verizon’s spokesperson, says that the couple’s friend Daryl is supposed to livestream the wedding and he’s not getting any service. When Daryl mentions he’s got an Unlimited Plan, Middleditch says it’s the “Right plan, wrong network” and starts describing Verizon’s offer, including 4G LTE network, which is “the largest” and “most reliable in America” and “built to work better in cities”. Eventually, he gives Daryl his own phone to livestream the wedding and dashes out, but not before saying a joke: “Ok, let’s go live. Say Hy to everybody who wasn’t invited”.

The spot ends with the voiceover saying “When it really, really matters, you need the best network and the best unlimited”. It is also highlighted that, when you activate a new line with unlimited and trade in select phones, you can get the best smartphones for just $15 a month.