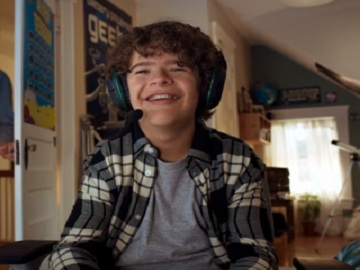 Verizon promotes, in a new commercial, its bundled Internet access, telephone, and television service, Fios by Verizon, highlighting that you can get Internet + TV/Phone for $79.99/month.

The 30-second spot, dubbed “Game On”, features several kids ready to play a video game online. Before they begin, “Stranger Things” star Gaten Matarazzo, seen with headset on and controller in hand, asks that anyone without Fios by Verizon, naming then Ben (played by Michael Marchese), “stay out of the way” so the lag doesn’t get them all killed. “What’s so good about Fios anyway?” – Ben asks. Gaten’s answer is a rhetorical question: ” What’s so great about 100% fiber-optic network that makes your gaming system actually work awesomely?”. At this point, Gaten’s dad opens the door, asking him if he took out the trash and Ben takes the opportunity to call him “garbage boy”. Gaten immediately finds a reply aimed at Ben, which makes all the others, except Ben, laugh: “Dad, I already took out Ben.”. “It’s not funny.” – Ben says.

The commercial ends with the voiceover says “Gaming is best on 100% fiber-optic network” and urging viewers to get Fios, “now at just $79.99/month with a 2-year price guarantee with a 2-year agreement”.