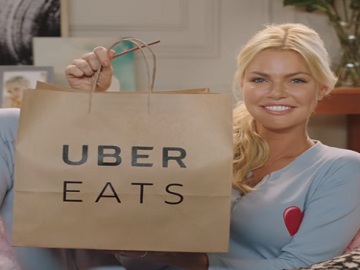 Sophie Monk tells people what she will be eating tonight in a spot promoting the food delivery app UberEATS.

The English-born Australian singer/songwriter, who is also an actress, model and radio personality, stars in a 15-second ad, part of Uber’s “Tonight I’ll Be Eating…” campaign, in which she is seen filing her nails on the couch. “Tonight I’ll be eating a monster veggie burger, hash brown and cheesy fries from Dougie’s Grill.” – she says looking at the camera. The next moment, the doorbell is heard and a delivery guy brings her an UberEATS bag with her order.

The spot, aiming to highlight that you can have restaurant-quality food delivered to your door quickly and reliably, is just one in a series of nine, starring other eight celebrities who are declaring their local dinner choices from cities across Perth, Sydney and Brisbane.