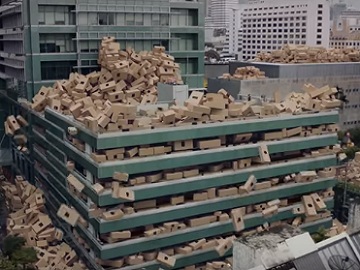 Uber promotes its services in a new commercial showing/reminding people what happens when they insist on driving their own car through the city, during rush hours, without having anyone else in the car, instead of sharing rides or using a bicycle.

The spot, titled “Boxes”, part of the ride-sharing app campaign “Let’s Unlock Cities”, illustrates the idea of traffic congestion through single-person box-cars that overflow a city to the point of absurdity. They are seen on the city streets, with their drivers shouting at other drivers and desperately looking for a free parking spot.

People stuck in traffic jam, taking the opportunity to grab something to the eat at the wheel, while waiting to be able to keep going, pedestrians making their way among box-cars, that are everywhere around, a pedestrian almost hit on the crossing, a fight between two drivers, a small box-car “stealing” the parking spot of one of regular size – are only some of the scenarios presented in the ad, which ends with a more dramatic scenario, featuring millions of box-cars that take up valuable space and put in danger people’s lives.

Uber highlights, on its “Unlocking Cities” platform, that up to 60% of cars travel with just one person in them during peak hours and provides also other worrying statistics regarding the time spent in traffic and looking for parking. The company states that a recent study revealed that we’d need far fewer cars if we start sharing and invites people to imagine what our cities could look like with fewer cars and more space for schools, hospitals, and parks. “Let’s come together to create a city with fewer cars and more space to live. Let’s unlock our cities together.” – Uber urges people.

The song playing in the background is “The Bare Necessities” by Phil Harris & Bruce Reitherman.