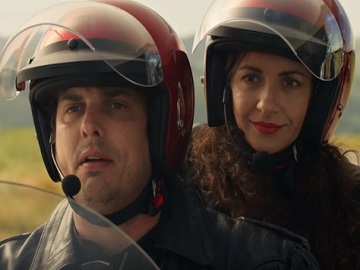 They meet each other at a crossroads and Jack, with a bigger motorcycle and his girlfriend in the passenger seat, brags about his new phone and asks Arthur if he’s jealous.

“I just got the new Samsung Galaxy S8 for free from U.S. Cellular” – comes Arthur’s response, and when Jack is barely able to ask “free?”, Arthur, realizing that Jack has paid for his phone, twists the knife in the wound: “you had to pay for yours?”.

“Smart enough to know that U.S. Cellular has a strong signal out here. How’s your signal?”, asks Arthur, who doesn’t receive any response from Jack, who’s now looking at the display of his smartphone, showing “No Signal”.

At this point, Jack remains also without his girlfriend, who teleports herself on Arthur’s motorcycle backseat, leaving him unable to say anything but “Baby..”.

“Get a free Samsung Galaxy S8 and get it with a stronger signal in the Middle of Anywhere” says the voiceover at the end of the spot.