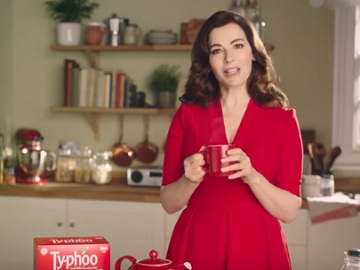 Nigella Lawson stars in a new advert for the Wirral-based tea company Typhoo Tea, by creative agency McCann
Manchester, that debuted on Friday, May 12.

The 30-second spot, titled “Which Typhoo Are You?” and directed by Chris Cottam, features the celebrity chef,
wearing a red dress, highlighting that “everyone has their own idea of the perfect brew” and setting out on a “journey” to showcase the different ways Thyphoo drinkers have their tea. She passes by several people having a cuppa, such as two explorers in a tent filled with snow, who go for strength, a London taxi driver who upends an entire sugar sachet into his flask, because he goes for a “much sweeter” tea, a young couple in their living room who are disagreeing over decorating swatches, as it’s “always such as personal thing”.

Her “journey” takes her also in the teashop opened by the brand’s founder, John Summer Jr., in 1903, and
ends at a tea party in a doll’s house, with a robot and a bunny as hosts/guests, where a miniature Nigella takes a sip of tea from a gigantic mug. “So we can all take our tea just the way we like it. With cake, preferably.” – says Lawson, asking then to the other participants if there is any cake.

The advert ends with the question “Which Typhoo Are You?”.

Nigella Lawson was unveiled as the brand ambassador for the tea company Typhoo Tea in January 2016 and starred in a major marketing campaign, revealing her perfect “Typhoo Moment”.