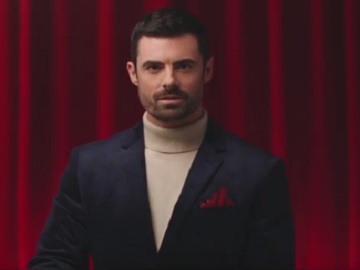 Twizzlers presents “A Very Serious Film” starring a very serious actor who talks seriously about the unseriousness of Twizzlers and concludes that “you can’t be serious with Twizzlers”.

“This is a serious film. That’s why it has black bars here and here. And that’s why it’s called a film, not a video. Because videos are for fun serious things, like otters holding hands. Cute. Back to our serious film, which is not cute. It’s serious. So serious that sometimes one word is singled out for no reason. Floppy. Ok, that’s a bad example. Floppy is no serious word. And as we’ve already stated, this is a very serious film. About taking the unseriousness of Twizzlers seriously.” – says the actor in a British accent, adding, at this point, “Something very serious in French”. “We made that phrase up”, reveals the man, mentioning that “even in a super serious film, you can’t be serious with Twizzlers”.

The 45-second spot, from creative agency Crispin Porter & Bogusky, ends with the actor taking a bite from a limp and droopy licorice twist, and with the brand’s tagline on screen, “You Can’t Be Serious”.

The campaign, aiming to show that “You Can’t Be Serious” with Twizzlers, includes also a series of 15-second spots featuring people who are trying to keep a serious face while their faces are tickled from offscreen by surprisingly long Twizzlers.