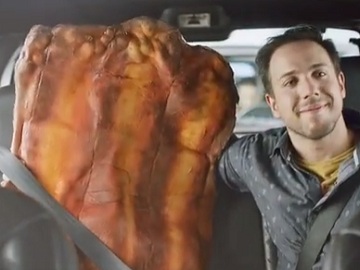 Tums urges you fight heartburn fast with Tums Smoothies, in its latest ad.

The 30-second spot, titled “Battle of the Burn: Who’s Takin’ Down Bacon?”, features a guy eating a bacon sandwich in the backseat of a car stuck in a traffic jam. Soon, he find himself affected by a heartburn and “visited” in the backseat by a huge slice of crispy bacon that starts beating him. His friends watch but can’t do anything, the car is pitching as the “predator on the loose” pushes its victim against the window, and other drivers are closing their windows. He tries to escape, but his attempt is shattered by the greasy Bacon, that draws him back and continue its aggressive outburst. Eventually, though, it loses the fight because the guy takes Tums Smoothies and manages to immobilize it with the seat belt.

According to the brand, its Smoothies relieves not only heartburn, but also sour stomach, acid indigestion and upset stomach associated with these symptoms.