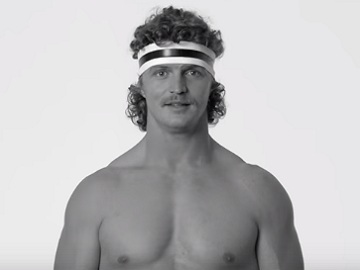 “Tradie underwear is intuitive, beautifully engineered, yet ferocious.” – says Cummins at the beginning of the
30-second spot, in which he’s wearing nothing but Tradie underwear, as expected. “These things are so comfortable I genuinely feel naked right now.” – he also says, sharing then with viewers what a wise man once told him, namely that “the difference between where you are and where you want to be is where you drop your tackle.” He then goes on by checking the resistance ratio and concludes that “Tradie underwear is a piggyback for your package”.

Cummins, considered an Australian Rugby Union legend and “the most Australian person ever”, is an ambassador for TRADIE Underwear & Workwear alongside world number two Freestyle Aerial Skier, Danielle Scott, who’s the first ever Tradie Lady ambassador.