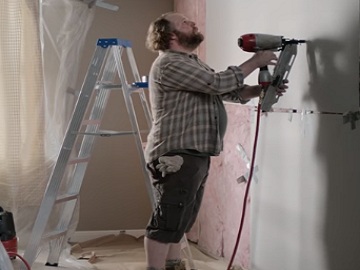 Toyota highlights the importance of using authorized service centers, that you can trust every time, in a hilarious new commercial.

Titled “Carpenter”, the spot begins with a short conversation between a man and a Toyota Service Centers representative, who answers to his question “Why use Toyota Service Centers?” with another question: “Well, you wouldn’t use just any… carpenter, would you?”. This gives him food for thought, leading to a scenario that involves, obviously, a carpenter who doesn’t know what he’s doing and manages to destroy the man’s house. Thus, the guy asking the question about Toyota Service Centers sees himself “attacked” in his own kitchen, while he’s having his morning coffee, by several nails launched through the wall by a dizzy carpenter. His kitchen furniture ends up damaged, with cupboard glasses broken, his cup of coffee smashed, and him forced to hide under the counter in order to avoid a shower of other nails.