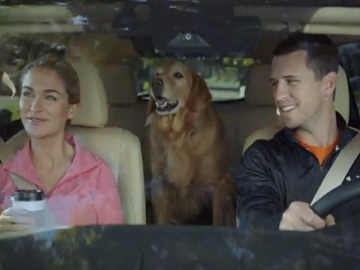 Toyota showcases the restyled Highlander in a new ad from the “Meet the Poseys” series, created by H&L Partners.

The spot, titled “Ball Thrower” and directed by Greg Bell, features the Poseys in their Highlander, taking their dog to a dog park. “Somebody knows we’re going to the park” – says Kristen, referring to their Golden Retriever sitting in the back seat, that feels “so much joy from a ball”. “Crazy, huh?” – asks Buster, who is a professional baseball catcher for the San Francisco Giants.

“Just like you, the Poseys enjoy the restyled Highlander. And just like you, the Poseys play toss with their dog.” – says the voiceover, while on screen Buster is shown throwing the ball after a guy has thrown first. With respect to the latter, he – given his “job” – managed to throw it very far, like a pro, without a ball tossing device, making the other get angry and throwing his ball tossing device in the nearest ashcan.

The spot ends with the voiceover saying that restyled Highlander is “for families like the Poseys and yours”.

Buster Posey and his wife, Kristen, endorse also the brand’s new C-HR and Prius Prime in this campaign.