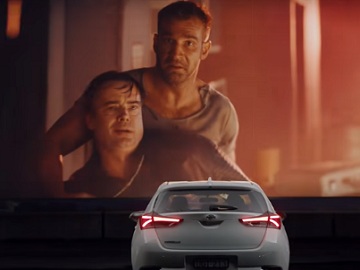 Toyota Australia promotes its special offer on Corolla Ascent Sport in a new ad, highlighting that you can get it now for only $23.990.

The 30-second spot, titled “Drive In”, features a couple on a date, watching a movie at a drive in, in a Corolla Ascent Sport. While on screen a fighting scene rules, the young woman shows how impressed she is by some of the car’s features, such as touchscreen, voice recognition, and a messaging app, telling her date that his Corolla is “cool”. “Yeah, and it was just $23.990.” – answers the guy. At this point, one of the actors in the movie, who was forcing another to say something, stops from what he was doing to make sure he heard well. “Did you say $23.990?” – he asks, receiving in response a confirmation and the information that, besides this price, there was also a three years cap price servicing. “That’s actually great value” – says the other actor.

The Toyota Corolla Ascent Sport, with 5-Star ANCAP Safety Rating, features 1.8L Dual VVT-i engine, 7-Speed CVT,
16″ alloy wheels, halogen headlamps, 7″ touchscreen audio, 60/40 split fold rear seats, and it can be purchased at the drive away price of $23.990, applicable for Private, Bronze and Silver fleet customers, and primary producers only at participating dealers. This offer is available on vehicles produced between January 2017 and July 2017 and purchased by July 31, 2017, unless offer extended.