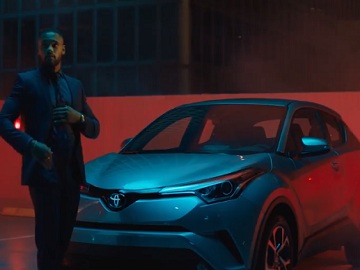 Toyota continues its ad campaign showcasing the 2018 C-HR, described as “a daring crossover”, with a new commercial
that is a modern take on a classic tale.

In the 30-second spot, titled “Lil’ Red”, a young man “approaches” a Toyota C-HR in a parking lot, surprised by some of its features. “My, what big rings you have!”, “My, what bright eyes you have” – says the guy, when the owner, a sexy brunette portraying a modern Little Red Riding Hood, shows up from a club, unlocking the car. “All the better to tease you, my dear” – she says in a flirtatious voice, while pulling down her hood. Later on, she’s shown at the wheel of the C-HR, with her friends congratulating her for the original reply, and the Lane Departure Alert system “in action”, highlighting that it helps drivers avoid incidents by issuing an audible alert and visual warning on the MID screen in case an inadvertent lane departure is detected and providing gentle corrective steering to keep the vehicle in the lane if the driver is not taking the corrective steering action.

However, the company highlights that Lane Departure Alert is not a substitute for safe and attentive driving practices, urging you to always pay attention to your surroundings and drive safely.

The spot ends with the voiceover inviting you to “get ready to spin your own tail” and saying the campaign tagline, “A daring crossover”, referring to the new C-HR.