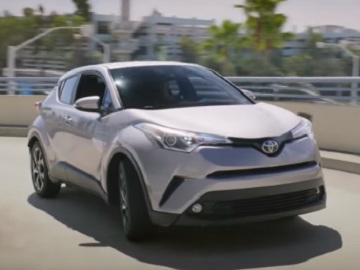 Toyota showcases the new Toyota C-HR, described as “a daring crossover” in a new ad campaign, titled “Flipping the Script”.

One of the 45-second spots, titled “Car Wash”, highlights that “you could go to the car wash or you could flip the script and bring the car wash to you in the first-ever Toyota C-HR” by featuring three friends in a C-HR who stop the car in a neighborhood where a bunch of kids are playing with balloons filled with water. Two of them get down, throw at them a few balloons and leaves several more on the lawn, then get back in the car and shout with enthusiasm “Wash our car”. The children don’t wait too much before starting to throw the balloons at the car until it is completely clean (not that it was dirty before).

The ad also highlights that the C-HR features Pre-Collision System with Pedestrian Detection function, which helps
drivers to brake in time, as they receive an alert in case a pedestrian is detected.

According to the Japanese automotive manufacturer, the new Toyota C-HR responds with the agility of a dynamic hatchback with the comforts of an SUV and that, thanks to the Toyota Safety Sense technologies, you’ll feel protected no matter the conditions.