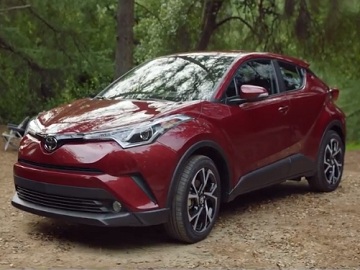 The professional baseball catcher for the San Francisco Giants Buster Posey and his wife, Kristen, star in a new ad campaign launched by Toyota to showcase the restyled Highlander, the C-HR and the Prius Prime.

The campaign, titled “Meet the Poseys”, includes a series of funny spots with Buster in the spotlight, and each of the above mentioned cars. The “Camping” ad features Kristen and Buster in a C-HR, on their way to a camping pitch, where they are going to meet with another couple. On the way, they go through the list of things they should have packed, which aims to highlight the generous space provided by the crossover’s trunk, such as tent, hammock, comforter.

“Just like you, the Poseys enjoy hitting the road in their all-new Toyota C-HR” – says the voiceover, adding “And just like you, the Poseys are happy to pitch in to help”. At this point, Buster Posey is shown in the woods, chunking down pieces of wood for the fire camp, embarrassing the other guy, who’s not as strong and skilled like him, and decides to stop doing the same thing.

“Introducing the C-HR. For families like the Poseys and yours” – says the voiceover at the end of the ad, adding the company’s tagline, “Let’s Go Places”.