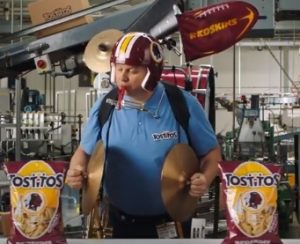 Tostitos has launched a new ad campaign, promoting its Lucky Bags, which celebrate the official traditions of 19 NFL teams through team-inspired packaging.

“Luck can define the fate of any game. And Tostitos NFL Lucky Bags wanted to help.” – the voiceover says in the spot presenting the idea behind the campaign, mentioning that the brand took “your team’s superstitions and traditions” and turned its bags into lucky bags for NFL fans.

One of the Lucky Bags is honoring the historic Redskins marching bands (one of the oldest in the NFL). The 30-second spot dedicated to the Washington Redskins features a one-man band playing “Hail to the Redskins” as the chips come off the production line, infusing them with Redskins luck. “Do your part and grab a lucky bag this season.” – the voiceover urges viewers, adding that Tostitos is “helping you help your team win”.