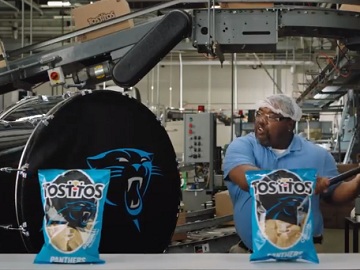 Tostitos promotes its new “Lucky Bags”, a limited-edition team-inspired packaging that honors the traditions of 19 NFL teams, in a series of new ad, one for every team.

“This NFL season, Tostitos created Panthers Lucky Bags by pounding Carolina’s drum for every bag.” – the voiceover says in the 30-second spot dedicated to Carolina’s Panthers, which features a man pounding a drum as the chips come off the production line and shouting “Go Panther. All the way!”.

The commercial ends with the voiceover urging you to “Do your part and grab a lucky bag this season.” and adding the campaign tagline “Helping you help your team win”.