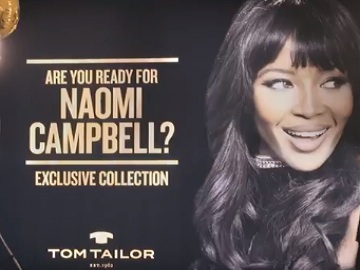 “Are you ready to feel like Naomi Campbell?” – this is the question raised in the commercial released by Tom Tailor
to promote Naomi Campbell’s collection for the brand, which is actually a footage of how the collection was introduced.

The Hamburg-based fashion house invited a few women to wear some of the pieces designed by the supermodel and made them feel like her by having them walk on a red carpet in front of a cheering crowd of fans, waiting for them in front of the Tom Tailor store, willing to take photos together and have their autographs. A huge billboard featuring the text “Are you ready for Naomi Campbell?” was then unfolded.

Tom Tailor announced, earlier this year, in June, that, in future, design collaborations with famous people from the worlds of fashion, music and media, will play a stronger role in its new positioning marketing strategy, revealing, at the same time, that three “capsule” collections (limited special editions) were planned with the NC Brand in the coming 12 months.

The first Naomi Campbell capsule, that went on sale at the end of October, and has a Christmas and New Year theme, with black and gold as the main hues.