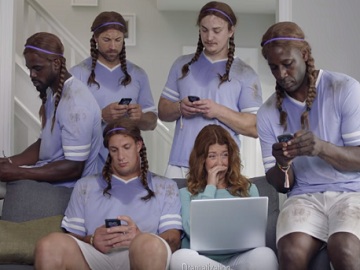 The 30-second spot features a teenage girl entering the living room wearing a dirty uniform and texting. “Hi, honey, how was practice?” – her mom asks. “Good.” – her daughter answers absent-minded. At this point, the woman feels the bad smell (illustrated by a group of men, including Rob Gronkowski, who sits right next to her, dressed in the same type of girl uniform and wearing braided pigtails) and asks “It must have been hot out there today, huh?”. Gronk and his fellows reply with a “Yeah” before the girl says the same.

Her mother then asks her to put the clothes she’s wearing in the laundry room and all the “girls” set off to do that. “Do your athletes bring home big odors?” – the voiceover asks at the end of the spot, adding that “Tide Sport is super concentrated to beat even the toughest stains and odors”.

The New England Patriots tight end will appear in a series of other hilarious new spots, set to roll out this fall, to promote the Tide Sport PODS, that will feature him as a young female athlete, complete with the same braided pigtails.