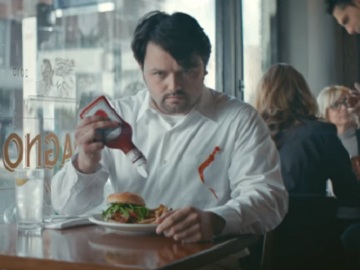 “Nature gave man tomatoes. And man turned them into stains. Nature gave man rain. And man turned it into stains.
Isn’t about time man took nature and turned it into something that cleans?” – the voiceover asks in the 30-second spot, which features a man who, after having his white shirt stained with ketchup during lunch and soaked following a car driving through a puddle and splashing him, buys a bottle of Tide purclean on his way home.

Thanks to this 65% plant-based product, that has “the power of Tide and the strength of nature”, he manages to turn his dirty shirt into a perfectly white shirt again. However, he is soon forced to put it back into the washing machine “because even when nature gave man a best friend, men left the door open.”. Yes, his dog got out of the house, in the rain, and when he came back, shook himself right near his shirt and water drops spattered it, making it dirty again.