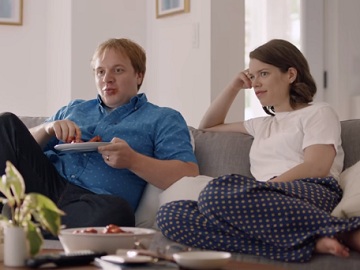 The 30-second spot, created by Saatchi & Saatchi and titled “Denim Hacks Made Simple”, features a couple who used to resort to some pretty creative hacks to take care of their jeans, such as putting them in the ice-box, and hanging them at the window. These hacks, however, came with some unexpected (more or less) consequences, such as finding the jeans with a bag of frozen meat stuck on them and the guy almost suffering a heart attack seeing, early in the morning, while brushing his teeth, a pair of jeans hung at the window as if a dead guy was there. Luckily, they discovered Tide PODS Plus Downy and now their jeans stay in great shape and they actually get clean.

The spot ends with the guy eating on the couch some meatballs with red sauce, apparently, and wiping his hand on the jeans, justifying to his wife, who gives him a look of reproach, that she’ll wash them.

The voiceover mentions that Tide PODS Plus Downy is “super concentrated to clean and condition to keep your favorite clothes looking great” and adds the brand’s tagline, “It’s got to be Tide”.