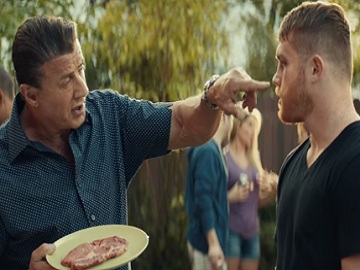 Tecate has released two new commercials starring Canelo Álvarez ahead of his fight with Julio César Chávez to promote the Tecate Light. The Mexican boxer, bankrolled by the brand of beer named after the city of Tecate, Baja California, shows us that he’s bolder than Stallone, who co-stars and challenges him to do all kind of things by urging him to “be bold”.

In one of the spots, running 30-second long, the 70-year-old American actor challenges Álvarez, while training in the ring, to hit a beehive and later on, at a barbecue, when he sees him with an eye stung by bees throws him a piece of cold meat to put it there. The Mexican boxer, though, replying “Be bolder”, grabs the piece of meat and throws it on a grill.

The spot is part of the “Born Bold” campaign, launched by Tecate in 2015, which promoted both Tecate and Tecate
Light in English as part of the brand’s strategy to reach Hispanic bicultural millenials who prefer to consume media in English.