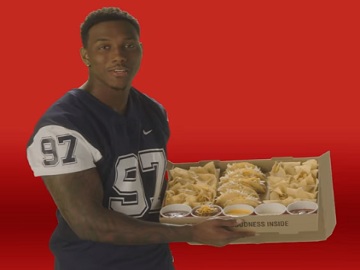 The Dallas Cowboys rookie defensive end, who partenered with the Farmers Branch-based restaurant earlier this year, in late June, stars in a commercial in which he says almost only “Taco” while holding a taco, eating a taco, or having his head replaced by a taco. He’s also showcasing the Wholotta Tailgate Box, which includes eight Crispy Beef Party Tacos or eight Chicken or Beef Taquitos, four large bags of chips and five large dips, including queso, refried beans, jalapeno ranch, firehouse salsa and Taco Bueno’s signature red salsa.

With reference to the endorsement deal with Charlton, whose given name is actually Vidauntae, Taco Bueno CEO Mike Roper said, in a news release: “At the heart of any good partnership is authenticity and genuine respect. Taco is serious about football, and we are serious about Tex-Mex, and that is a winning combination. We couldn’t be more excited to bring some fun to all our fans this upcoming football season”.

This is the second endorsement deal for Charlton, who also officially signed on with Austin-based Big Red.