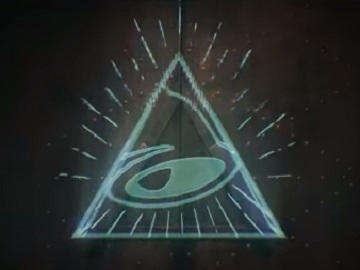 Taco Bell reveals who is behind its dollar menu in a new commercial created by Deutsch.

“There is a powerful connection between the dollar and Taco Bell. Because it unlocks a world of twenty decadent menu items. From breakfast to late night.” – the voiceover says in the 30-second spot, which highlights that the first two letters on a dollar bill are T and B and showcases some of the $1 menu items, such as the Cheesy Beans & Rice Burrito, the Mini Skillet Bowl, Triple Layer Nachos, Spicy Tostada, Cheesy Roll-Ups, and more, spread on a large table at a party, where members of a seemingly secret society are enjoying them.

“Twenty items for a dollar. Twenty steps on the pyramid. Who’s really behind this? Is it the Illuminati? Or The
Belluminati?” – the voiceover asks, while on screen people wearing long cloaks similar to those worn by cult members are seen eating Taco Bell 1$ menu items.

The commercial ends with the voiceover urging viewers to “Experience the power of Belluminati at Taco Bell”.