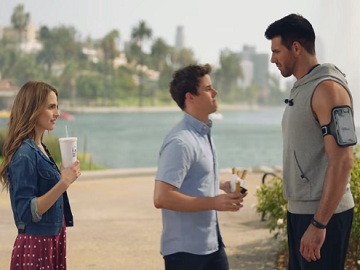 Taco Bell has released a hilarious new commercial to inform that the Rolled Chicken Tacos are back at Taco Bell.

The 30-second spot, titled “The Ex”, aiming to highlight that the Rolled Chicken Tacos are “easy to dip, still hard to put down”, features a young couple walking down the street, with her holding a drink and him a Rolled Chicken Tacos pack. They encounter her ex, a hunk who’s out running, judging by the outfit he’s sporting.

After a chit-chat, she introduces her current boyfriend to Mark, the guy whom she used to date. When the latter holds out his hand to make his acquaintance, her boyfriend, who’s holding in one hand the pack of Tacos and in the other a dipped Rolled Chicken Taco, does a chest bump, leaving Mark speechless.

“So easy to dip, so hard to put down.” – the voiceover says at the end of the spot, while the girl’s boyfriend is seen greeting her ex with a “See you, man!”. “Tasty shredded chicken rolled up with your choice of dips, only at Taco Bell.” – the voiceover adds.

The ad also specifies that the Rolled Chicken Tacos are available at participating locations for a limited time and that the choice is of two dips per 4 pack and one dip per 2 pack.

Previous: Tide PODS Commercial: Little Girl Superhero
Next: RetailMeNot Woman and Shaggy Dog Commercial – Cash Back Up to $30 in 1 Click